I believe that Oklahoma Baptists can be characterized by many things, but specifically by their commitment to giving to the Cooperative Program, to sending out missionaries, and to Falls Creek.

Falls Creek is the largest Christian camp in the United States. Beginning in 1917 with a little more than 230 campers, Falls Creek will this summer see upwards of 55,000 campers walking the grounds. More missionaries have experienced their call to a lifetime of service at Falls Creek than at any other place on the face of the earth. Oklahoma Baptists invest a lot into this work. Nearly 100 years, millions of dollars, and countless hours of prayer…on a daily basis. All for the proclamation of the Gospel and the advancement of the Kingdom. We could have done all of that and more, but apart from Christ, it would have failed. It is by God’s grace that Falls Creek continues to exist.

Southern Hills just returned from our week at The Creek. We took over 160 campers, including adults. More than 30 of those student campers had never before attended Falls Creek, and just as many do not have a church home where they are plugged in, growing, and serving. This is my fourth year to have the opportunity to go as a sponsor. I spent a good portion of my days cleaning showers, mirrors, toilets, and washing dishes. In addition to being a part of the cleaning crew, I was also asked to help lead a group of 9th & 10th grade guys with my boy, Parker Lepley.

Although I love these kids deeply, I was not too thrilled about leading this group. You see, I have lead this group of guys once this year, and I have nothing positive to say about that week. Not one single thing. I have never been around kids who were so disrespectful and irreverent. One can hopefully understand why I had low expectations for this group. And to nobody’s surprise, they started out the week just as I had expected them to, rotten.

Day 1.
This is always a chill day. No volleyball. We arrive around noon, get our bunks situated, and hangout for the afternoon. The students go off to tabernacle around 7:00 that evening. Each night after tabernacle, the students have a little over an hour to snag an icy date, or two. At 10:00 p.m. we start our cabin worship time. Following this, we have small group time and that usually ends around 11:30-11:45. During small group time, Parker and I asked them some basic questions. Questions like, “Why did you come this week?” “What do you hope to learn this week” and the final question was, “How can we pray for you this week?” The first answer was, “with your eyes closed.” This answer did not surprise or upset me. Not one iota. This is what I expected from this group of guys.

Day 2.
Great start to volleyball. I believe we only lost one game this day. During the evening small group times, it was the regular playful conversing with not one ounce of seriousness. We had been asking the guys what they learned throughout the day, and we got some typical Sunday school answers. Then, one of the guys asked me what I had learned. I reluctantly shared with them what the Lord had brought to my mind during the evening cabin worship. We had a marathon them for our cabin and how it was worth it. And so the comparison was made that Jesus is worth it. While talking about how running the race set before us was worth it, it occurred to me that many of our guys simply were not running. Simple as that. In fact, I would say that some of them were even walking backwards. So, I shared that with the group, just as they had requested. And this was day two.

Day 3.
More volleyball. As we were walking down the stairs of our cabin to our small group, a student asked if he could talk with me. Sure thing. We began talking about how he felt as if he needed to rededicate his life to Christ. That’s wonderful! As we talked through what that looked like, it became obvious to me that he was dealing with some assurance issues. I asked him the question, “If you were to die tonight, where would you go?” His answer was hell. He was confident at that moment that if he were to die, he would spend an eternity in hell, eternally separated from God. To hear your kid say that is heartbreaking. In that moment, all else becomes meaningless. The only thing that matters in this moment is the person’s response to God’s calling. One can deny it, discredit it, push it off for another time or they can respond in faith. This student prayed to receive Christ and experienced the forgiveness of sins. Glory!

“to open their eyes that they may turn from darkness to light and from the power of Satan to God, that they may receive forgiveness of sins and a share among those who are sanctified by faith in me.” Acts 26:18

Day 4.
Today is America’s birthday. 238 years old. It was a few minutes after 12:00 a.m. and we decided that we needed to celebrate this glorious day before everyone went to sleep. I had a patriotic vest in my car, so I went to get it. The plan was to just run up the stars, swing the door open and scream and shout and be as patriotic as we possibly could. And that is exactly what we did on the guys side. Just before I made the climb to the boys dorm, one of my fellow sponsors had this brilliant idea that I should take my shirt off and wear just the vest. That is exactly what I did. 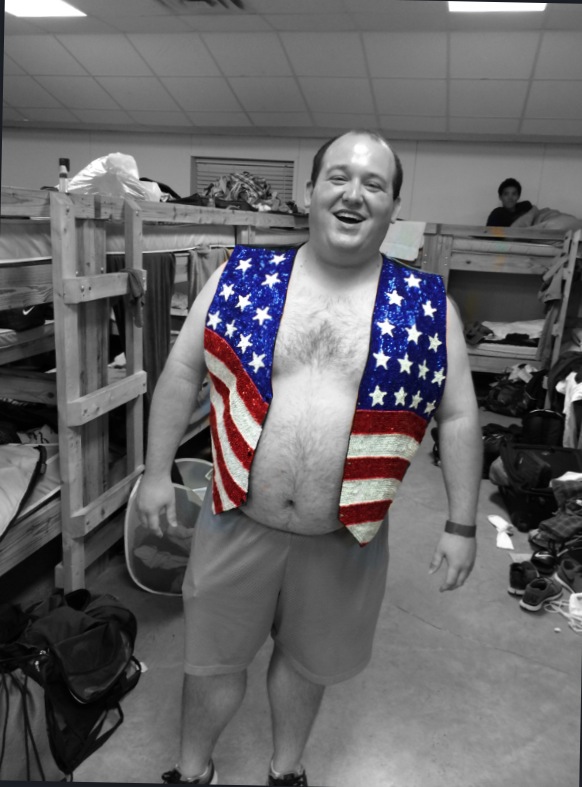 You are welcome, ladies.

Day 5.
Friday may be my least favorite day of camp, because it means that it is all coming to an end. All four of our teams that made it into the volleyball tournament lost. Always a disappointment. This evening after tabernacle, another one of our guys came to us and asked if he could talk with us. He shared with us that he sensed God calling him to missions. No clue what that looks like or what it will lead to, but this student has committed his life to spreading the gospel. We then got to pray with him about this calling on his life. When we finished praying with this one, someone came and told me that my little brother needed to talk to me. For those of you who do not know, I have a 16 year old brother. He does not attend church. Two years ago he attended Falls Creek and was saved. After that decision, he basically did nothing. On Friday night, conviction came over him and he knew that he needed to change some things in his life and start living in a manner that is pleasing to God. Parker explained to him what it meant to rededicate his life to Christ. We then got to pray with him. And for the first time since he was probably a toddler, my little brother gave me a hug and told me that he loved me.

These are a few of the stories from our students. The above stories are specifically from the guys in our small group. Many more made decisions, but Parker and I personally got the opportunity to talk with these three and pray with them through these things. Seeing the Gospel transform people will never get old. I once heard a preacher explain it this way…

If that does not make you happy, it is probably because you have yet to experience the love of Jesus. There is a God above who loves us! Apart from Christ, we are dead. There is no life within us. Without him, we will be eternally separated from him while suffering torment and anguish in a real place called hell. But, God chooses to reach down and breathe life into our dead corpses. That is the good news! Really good news. All of which, we do not deserve. The choice to follow him is yours. “this saying is trustworthy and deserving of full acceptance: “Christ Jesus came into the world to save sinners” – and I am the worst of them. But I received mercy because of this, so that in me, the worst of them, Christ Jesus might demonstrate the utmost patience as an example to those who would believe in Him for eternal life. Now to the King eternal, immortal, invisible, the only God, be honor and glory forever and ever. Amen.” 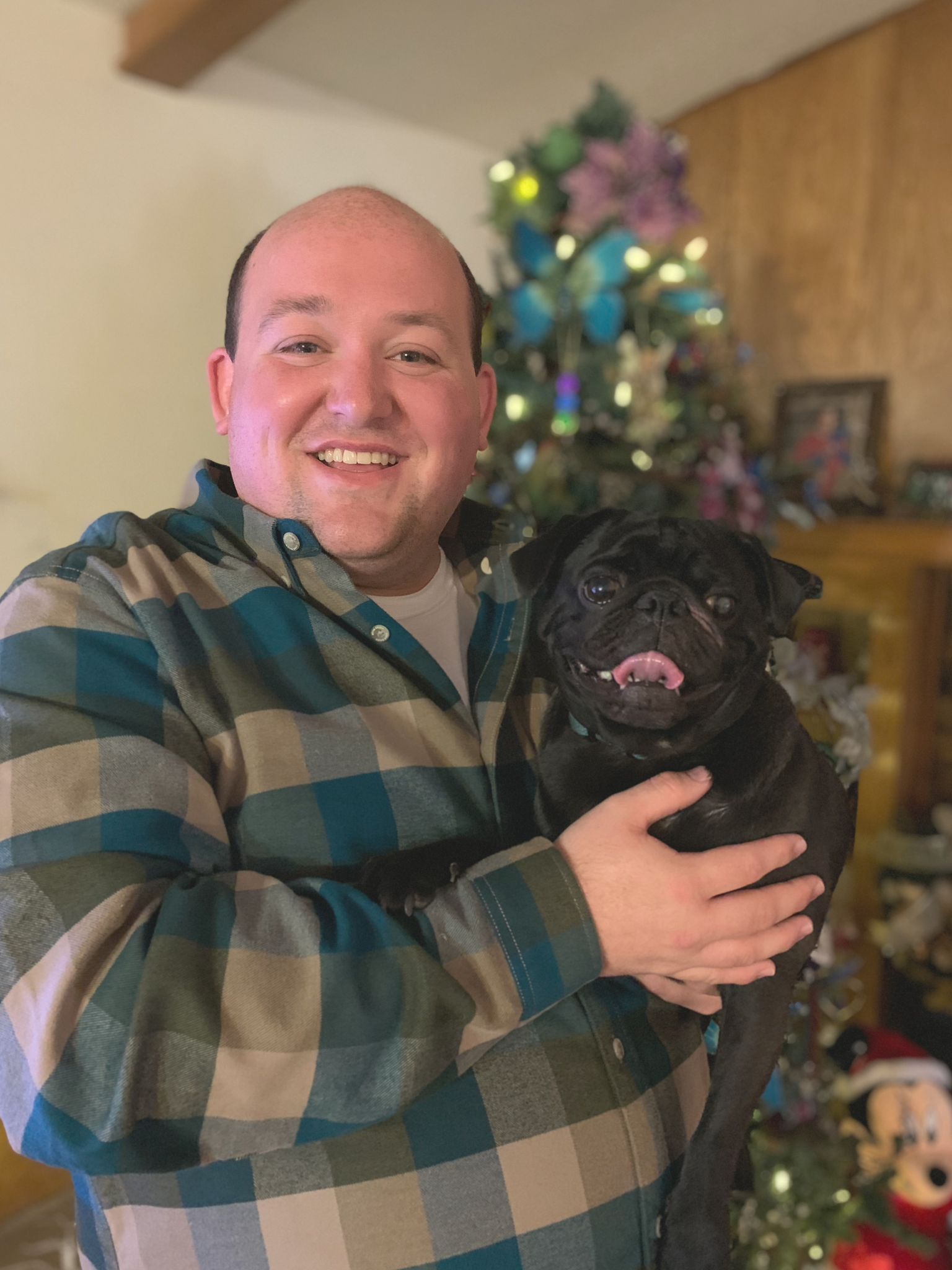 I am Tommy and I was born some twenty-nine years ago in the great state of Oklahoma. I was a packaged deal from day one; I have a twin and his name is Bobby. We are opposites in just about every way possible. Three days after our eighth birthday we received a gift from my mom and dad and they named that gift Dylan. I have a beautiful black pug named Winston.

At the age of seven God drew me to Himself and I responded in faith. I knew that I had done plenty of wrong and because I did wrong I was separated from God. I knew that I deserved to experience the wrath of God because of my disobedience. But, Christ loved me so much that he willingly gave his life for me. He lived the life that I could not and died the death that I deserved. I believe that on the cross the full wrath of God was poured out on His Son and because of this, my sins have been forgiven. Scripture assures us that without the shedding of blood there can be no forgiveness of sins. I confidently rest in the fact that the blood will never lose its power.

By the grace and mercy of God I am allowed to be a part of Southern Hills Baptist Church. They do well to love me, encourage me, challenge me, and rebuke me. This is where I have found my closest friends and they have very much so become a part of my family. I serve this local body as the Minister to Senior Adults.

I am a graduate of the University of Central Oklahoma (2016) and Southwestern Baptist Theological Seminary (2018).